How to Get Rid of Pesky Vape Odors 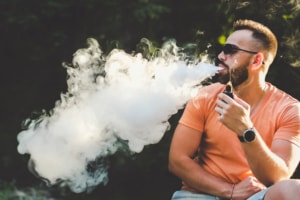 Congratulations! You’ve moved away from the health issues of cigarettes to embrace vaping. Although vaping might not be as healthy as avoiding nicotine altogether, it isn’t filled with all of the odor-causing chemicals that make you, your clothes, and your home smell like stale ash every day.

Now you’ve discovered a new problem. Vaping still creates a lingering odor. No matter what flavor of juice you might choose, vaping will eventually create a stale odor that likes to linger. You might not smell it because you’re around the scent all the time. Those who don’t vape, however, will let you know that it is there.

That odor becomes more distinguished if you’re vaping marijuana – in a legal manner, of course. Marijuana odors from vaping tend to smell like a combination of pine nuts and popcorn that you’re toasting on the stove.

Here are some ways that you can manage those vape odors to avoid future complaints.

1. Invest into a high-quality air purifier.
Many of the air purifiers which are designed to remove cigarette smoke odors will help you get rid of vape odors as well. The best air purifiers for the house help you to neutralize odors in a variety of ways. HEPA filters can strain small micron-sized particulates out of the atmosphere that can cling to the vapor being released. Ozone-generation options can add weight to vapor odors to strain them from the room. Run an air purifier while you vape, then for about an hour afterward, and you should be able to stop lingering odor issues.

2. Use an air freshener while you vape.
If you’re concerned that your vaping will generate complaints, then consider keeping a strong air freshener in the room where you vape, or in your vehicle. Something like Febreze does a good job of eliminating the initial impact of the odor, then removes some of the stale odors that can linger on couches, mattresses, and clothing. Just don’t spray the Febreze as you vape, as that can give you a nice chemical flavor.

3. Place an odor absorber in the room
Solid odor absorbers are a very affordable way of controlling vape odors in any room. You can find most of these products at your local store for about $5 or less. They come in an all-in-one product. Just peel the lid off the odor absorber and let it get to work. The initial smell of the absorber can be powerful, so don’t keep it in a tightly enclosed space for the first week or so. You can choose from a variety of scents, though citrus tends to work the best. You’ll need to replace them about every 30-60 days.

4. Use a moisture absorber.
Moisture absorbers are designed to remove excessive water vapor from a room’s environment. They are very effective when placed in the bathroom. They’ll also help you keep odors down as the crystals attract moisture into the container, then converts it back into water at the bottom of the container. As an added bonus, it will remove any musty odors that might be lingering in your room as well.

5. Try a flavor that doesn’t include food flavoring.
The reason why vape juice tends to linger in a room, much like cigarette smoke, is because the fluid contains about 10% food-grade flavorings in addition to the nicotine. There are zero-nicotine options as well. The other 90% of the juice is either propylene glycol or a vegetable glycerin, which tends to coat the walls and floor after you vape. Think about what your stove looks like after you cook ground beef and you’ll get an idea of what vaping does to an interior. Look for a different flavoring that isn’t food-based to see if you generate a better result.

6. Use the vape as an aromatherapy device.
If you own a vape that is a pen or portable unit, forget about this option. If you’re using a desktop vape, however, then give it a go. Once you’ve finished vaping, try placing a favorite essential oil into the device. Lavender is a favorite because it is strong enough to mask odors, gentle enough to be pleasant, and exposure to it can help you get to sleep faster. It will take about 10 minutes for the odor process to transfer. Not all desktop vapes make this possible, so refer to your owner’s manual for options.

Some Things to Remember About Vape Odors

Cigarette smoke is about three times more powerful than vaping when dealing lingering odors. The average vape is going to smell for about 5-10 minutes with most products. Cigarette smoke can be detected more than 3 hours after a single cigarette is smoked in a room.

Even with good ventilation, there are odor issues that build up over time if you tend to vape in the same space. These odor issues won’t build up as quickly as cigarette smoke, and they won’t smell as bad. They will still smell, however, and be somewhat bothersome to those who may be sensitive to unusual odors within an indoor environment.

You can also limit the impact of the odors that your vaping creates by reducing the temperature of your combustion. If you’re using a portable model, the odors generated by your vaping could take months to build up enough to be bothersome to others. Then use oils or concentrates when you vape instead of using fresh or dry herb.

If you do use fresh or dry herb while vaping, give yourself 10-20 minutes to remove odors for best results.

Vaping is a step in the right direction for many who are concerned about their health and the impact of smoking cigarettes. If you find that vape odors are becoming problematic, look for a good HEPA air purifier to place in your room. When combined with adequate ventilation and the other ideas listed here, you shouldn’t hear complaints about stale vape odors.